A Tribute to David

It is with great sadness that we give you the news that David Levene, a committee and long-standing member of the British Pistol Club, died on Monday 1st November.

David was an incredibly talented world-class pistol shooter, who excelled at Centre Fire and Standard Pistol. During the 1980s and 1990s, he competed at World, European and Commonwealth level. Amongst many outstanding achievements, David was a member of the GBR 25m Standard Pistol (.22) team who broke the British Record, which still stands today. Along with this, he came 4th in the Centrefire match with a score of 590, with the top 3 shooters finishing all with 591 at the 1985 European Championships in Osijek, YUG. David also won the Bologna Trophy, the challenge trophy attached to the British 25m Standard Pistol Championship, three times - in 1984, 1990 and 1997.

Following his international career, David volunteered much of his time to the pistol community including officiating at the Manchester and Glasgow Commonwealth Games, as well as the London 2012 Olympic and Paralympic Games. He had an encyclopaedic knowledge of the ISSF rules and what David didn’t know about the ISSF rules could be written on the back of a postage stamp! He shared this knowledge widely and helped to develop others, athletes, coaches and range officers alike.

David committed a vast amount of his time to the club through his position on the committee to running ranges at our club competitions. Both his knowledge and the support he gave to the British Pistol Club will be sorely missed by us all.

One of David’s requests was that if anybody wished to make a donation to the Macmillan Cancer Support. https://www.macmillan.org.uk/ 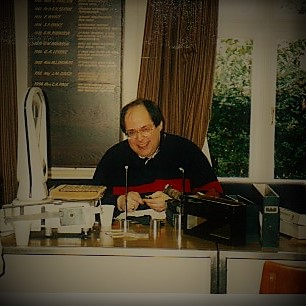